Don't Push Me Coz I'm Close To The Edge

﻿﻿﻿So the day dawned in London for the final antiques Fair of the trip.  Well, eventually it dawned but seeing how the Fair opens at 6.30am we didn’t see the sunrise for some time.  What a silly time for a Fair to open.  And you’ve got to be there by at least 6.00am if you want any chance of a car park.  So we stood in the chilly dark of an autumn morning with quite a few hundred people, waiting for the Fair to open.  It was Tuesday, why weren’t all these people at work?  And actually, at that time of day why weren’t they all at home in bed?  Any sensible person would have been.


Buyers behave very oddly at this Fair and are far more aggressive than at any other antiques Fair we’ve ever been to.  Once the gates open at 6.30 the crowd surges forward, with people pushing and shoving and running to get to the stands first.  Why?  It’s dark, people!  What can you see in the dark?
We decided to go to the inside stands first so we could actually see the stock on offer but it was absolute mayhem there as well, with people still trying to run from stand to stand even though the aisles were packed with hundreds of people and a slow shuffle was the best you could realistically hope for. This ludicrous behaviour happens every time we visit this Fair, with the politeness that the British pride themselves on not one bit in evidence. 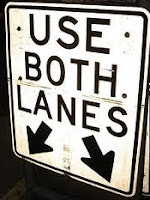 It’s just like on the roads, where many British drivers seem pathologically unable to queue in two lanes of traffic when those lanes need to merge into one another.  They just won’t do it, and prefer instead to queue up into one very, very, very long queue in the slow lane for sometimes a mile before the merge point.  This is so silly that various counties have now erected Use Both Lanes signs on various high volume roads.  But when the signs are not there people can get seriously upset and all fist-shaking and abusive and road-ragey at the upstarts who dare to use the (entirely legal) fast lane.  And often a driver will become a self-appointed Queue Monitor, blocking cars seeking to use the fast lane by getting in the fast lane but maintaining the speed they were doing in the slow lane.  In any other country this gobsmackingly rude behaviour would see them booked for a traffic offence, but in England we’ve even seen a Police car behave in such a manner.
It makes us wonder how the Brits would cope with the Paris Périphérique, where everyone drives like the clappers and every single bit of space is used and a whole lot of rapid lane changing goes on, but it works because everyone is courteous to each other.  If the Brits would get over their need to queue on the roads at every opportunity, especially when it’s entirely unnecessary, they would all get to where they’re going twice as fast and with much less upset.  Just an idea.


But anyway, that’s another gripe.  Back to the Gripe du Jour, which is the exceedingly rude behaviour of buyers at the London Fair.  It wasn’t every single person because I did encounter two perfect gentlemen, not counting Doug, who is always chivalrous.  But mostly there was more pushing here than at Italian ski lifts, and that’s a lot of pushing.  More pushing than at the Harrods’ yearly sale, and that’s a whole lot of pushing (albeit posh pushing).  More pushing than at Abu Dhabi Immigration Clearance, and that’s like, what queue – charge!
﻿﻿It appears that this Fair is the sole source of stock for some London dealers, so the reason they dash about to get in front as if their lives depend on it is that their livelihoods to some degree do depend on it.  Because they’re not willing to travel far from London, if they don’t buy at this Fair they’ll have no new stock that fortnight.  But still, that doesn’t account for all the unpleasant pushing and shoving, and all to get to stock that is for the most part over-priced.  If the Somerset sellers are delusional, the London sellers are positively certifiable - you see plenty of things for more than ten times the price of what you’d pay at the big northern Fairs.  And yet, even here, with sufficient hunting you can still find bargains so it’s still worth going. 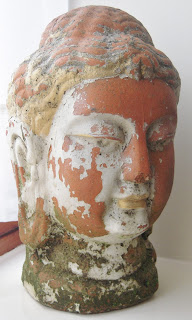 So we bought an attractive terracotta Buddha head that is about 120 years old, a cool quarter-circle metal plant stand that will look really stylish with the terracotta pots I bought in Paris, good glass and ceramics, some particularly nice vintage tins, some last pieces of jewellery, a very fabulous French Moulinex coffee grinder (just like the one I kept from a previous Fair and I absolutely did not expect to find another for the next few years), and a very beautiful French Art Deco glass lamp base.


Then it was up to Leicester to hunker down for the final bit of packing.  We spent the day getting the last of the stock wrapped and packed, then delivered all our boxes to the shippers and returned the van.  So that’s that – it’s done.  It’s been a good trip, with fun Play Days and interesting stock.  We’re heavy on good kitchenalia and lovely jewellery, but also have interesting individual pieces such as the Buddha’s head.  I think we’ve bought more vintage French copper cookware than we ever have before, and that means the wall in the shop will look fabulous.  And my French enamelware shelf will be stunning.  Now we have to wait until December for the bulk of it to arrive in Australia, although I will be able to start listing some of the jewellery, pictures and a few other bits and bobs on the website pretty soon after we get home.


The latest Moggie Report is that Caleb is being an utter ratbag, each day searching out everyone else one by one in their chosen comfy spots and jumping on them, biting them in the neck (his favourite tactic) and evicting them from their spots.  And when they move to a new comfy spot, he follows them and does it all again.  It was already the case before we left that he was running from bowl to bowl at mealtimes, snatching the tastiest bits from everyone else’s meals.  And everyone is so tolerant of him, he gets away with every annoy-you, bodge-you, steal-your-food, bite-you-in-the-neck antic he tries.


But oh dear, She Who Must Be Obeyed At All Times is about to arrive home and Caleb’s Reign of Terror Annoy is about to be curtailed.  Despite what he appears to be thinking, I am in fact Top Cat and he will do as I bid.  He and I had several clashes of will before I left on this trip, and visitors to the shop can attest to how incredibly loudly he can screech when he’s having a baby pussycat tantrum for not getting his way.  And now he’s had a month to run feral and get his way in everything so I’m afraid my return is going to shock his little furry socks off.


Caleb is going to be a big boy when he grows up and I don’t want him turning into a bully with a sense that he can just take whatever the others have, and I also insist on certain Rules that must always be obeyed.  In the shop Rule Number 1 is Not a Paw Past the Door.  The shop is on the main road through Eumundi, and there is no prospect that any of the moggies are allowed out onto the street unaccompanied for obvious reasons.  And that means I have to be able to trust them to obey Rule Number 1 even if I’m not looking because I’m with a customer.
Caleb has a fascination with the door, though, so he and I have already had several chats about it being The Forbidden Zone (which has led to a smacked furry bum a few times when he’s tried to ignore me).  I suspect that we’ll have to start from scratch regarding the shop door, which means he will be permanently tied to me via his leash when he’s in the shop, which will lead to hysterics when he wants to go and look out the window and I don’t.  Ah, you’ve got to love moggie training, so much harder than mutt training.  But being consistent and patient has worked with all the others and I’ll get there with Caleb too.  He just doesn’t know it yet. 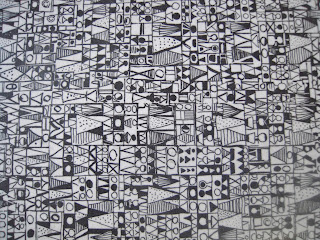 One last Play Day in Manchester to do bit of personal shopping, then the next stop is Bangkok, then home.  I won't get to write again until we're back in Australia, hopefully in the firm grip of a five-pussycat-embrace.
Posted by Debra Palmen at 3:22 am