Don't wish too hard for what you want

It is a well-known fact that I am an Ungrateful Wretch.  So let’s just all  agree to that and get it out of the way.

But who knew that I would be wishing for the return of the Banjo Busker?  You might recall that in my post a few weeks back, entitled I hear banjos - paddle faster, I was a bit down on Caloundra Street Fair’s banjo busker.  Yes okay, I was a lot down on him and kind of wished that his banjo would accidentally burst into flames.

So we skipped back to the Caloundra Street Fair last Sunday, and we were back in our original location.  Ah, how nice, we thought, when we observed that a lone acoustic guitarist was now the busker in residence at this end of the street.

Poor Banjo Busker has been reduced to the status of wandering minstrel, so it wasn’t just me who didn’t appreciate his tortured attempts to turn the banjo into a School of Rock Instrument of Awesomeness.  On the one hand strolling while he strums does make it harder for Banjo Busker to garner donations for his efforts, but not standing still also means that objects hurled at him are more likely to miss.

So we set up to the dulcet tones of the acoustic guitarist, and thought it was all very civilized.  That was at 7am.  The crowds again got off to a slow start, so we had time to listen.  And listen.  By 9am our eyes were bulging, as we were slowly hypnotized by the utter blandness.  Goodness knows what his mother called him, but I ended up naming our busker The Amazing Mesmero.  The only song I recognized was Green Sleeves, but other than that – and indeed including that – it was a nonstop litany of mesmerizing elevator musak.

While I was eventually able to tune-out Banjo Busker as he mutilated rock classics, The Amazing Mesmero was more insidious.  He was a stealth master, able to creep into your skull, and then slowly and blandly scramble your brains.  I forget all of the provisions of the Geneva Convention, but I’m pretty sure there is some rule about not driving people insane with music.  I know it actually refers to keeping people awake with very loud rock music, but I submit that blandy-bland blandness is just as tortuous.

So here’s the thing:  against my will I am now becoming somewhat of a busker connoisseur.  And it is my informed opinion that whacky totally-don’t-work interpretations of rock classics beat flavourless, unremarkable-other-than-to-note-how-boring-it-is, any day.  So come back Banjo Busker!  All is not exactly forgiven, but at least with you we stay awake.  The Ungrateful Wretches who didn’t appreciate you still don’t, really, but who knew when we wished ill on your banjo, when we hoped it would twang its last, that you would turn out to be the best of the bunch.

So if you’re determined to continue on your hard rocking ways, Banjo Busker, I’ve even come up with some suggestions to help keep you unstoned (and I mean that in the Biblical sense, not the Hard Rocker sense).

Yes, because this is an Interactive Blog, get your best banjo impersonations ready again, people, and tell me what you think of these:

AC\DC:   TNT, Highway to Hell and even Long Way to the Top (if you wanna rock’N’roll) and OMG what about Back in Black?

Deep Purple:  Smoke on the Water;

Nirvana:  Smells Like Teen Spirit – this would be fantastic if Banjo Busker also grew his hair and threw his head up and down a lot as he played;

This is a bit more laid back, but what about Eric Clapton, Layla?  Try a quick dang-dang-dang – I think this could work.

Rage Against the Machine:  Killing in the Name – what do you think – too out there?  If it worked it could be epic, though.

Queen:  Bohemian Rhapsody.  And yes, a bit of head banging a la Wayne's World would be a nice accompaniment.

Okay, so that is my contribution to Banjo Busker’s return as a Hard Living, Head Slamming, Banjo Slaying, Rock God.  He’s going to have to lose that dinky little hat he wears, but styling advice can come later.

Meanwhile, next Sunday (16 February) it’s back to the Peregian Beach Market, where I shall bring out the last of the wire potato baskets, and a very cool 120 year old hand-forged metal anchor that we totally forgot we had.  I think Peregian might be just the spot for it.  If we can’t sell something so interesting and quirky in a beach-house environment, I will give up, flounce off and spend the rest of my life in a dark room watching The Bold & The Beautiful.  Actually, that’s not such a bad idea anyway ….

I also just remembered the fabulous large ceramic elephant we bought on our last buying trip – in my defense I did purchase him last September and haven’t yet unpacked the box he is in.  So I shall dig him out, and he shall make his first appearance at Peregian as well.

We’re still finding plenty of interesting stock, and we have quite a few boxes to unpack yet.  But we’ve decided that a good deal of this stock is too small and to fiddly for us to be packing and unpacking all the time for the markets, so here’s what I’m going to do – sell it online. 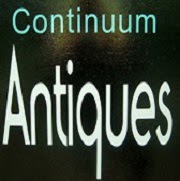 And on that front, yay, we now have a Business Facebook page up and running!  Remember my New Years’ Resolution to do this?  Well it’s started on a small scale, and I shall keep it quite small.  I will update it probably every week with a few new items and things that I won’t offer anywhere else.  Yes Exclusive Offers, of good stuff.

So if you have a Facebook page, perhaps you’d like to have a look – our page is called Continuum Antiques.  I decided to get into the spirit of mesmerizing, so the cover picture features Artemis looking suitably hypnotic.  You’ll see what I mean when you get there.  If you like the page, will you push the Like button?   Then you will receive my updates and exclusive offers, plus the occasional prize draw that will be open only to Facebook members who have Liked my page.

In breaking news, we are definitely going on another buying trip in March – it was decided only this morning.  But that’s not far off, and there is so much planning that goes into a successful buying trip, so I shall be a headless chook for the next little while.  More on this next post.
Posted by Debra Palmen at 7:04 pm