Being Good, Being Bad & Entirely Having Fun

We caught the train from Portsmouth to London to visit the Leonardo da Vinci exhibition of anatomical drawings at Buckingham Palace.  London was fairly teeming with tourists, and too bad if we had wanted to tour the Palace itself because you have to book online if you want to be sure to get a ticket.  But we only wanted to see the da Vinci exhibition, and obtained a ticket that allowed entry 45 minutes later.


So off we went just down the road to have a picnic lunch at the Victoria & Albert Monument, right across the road from Buckingham Palace.  But when we arrived there were barricades everywhere and hundreds of people occupying the V&A Monument.  A quick check with a friendly Bobby revealed that the Changing of the Guard was about to occur, and magically a couple of spaces appeared at the front of the barricades just as we turned up so we thought we should stay to watch.  The Changing of the Guards is such a palava and you can imagine the Queen upstairs in the Palace thinking Just get on with it! but no, the Guards have to march this way and that way, with several bands accompanying them, entirely holding up the traffic in all directions.
Prior to the Guards emerging from the Palace’s front courtyard lots of police officers on horses mill about, making sure the potentially unruly crowd remains ruly.  I kept my camera trained on one particular horse which was playing up big time and I had hoped to get a Policeman on Arse photo, but he retained his seat.  Which, of course, was a good thing.  Really.  Just not as amusing as it might have been.


Anyway, after the Guards had changed and the crowds wandered off elsewhere we were able to pop over to the V&A Monument for our picnic lunch, and then back to the da Vinci exhibition.  But first there was time to look about the Buckingham Palace gift shop.  I very much admired a multi-stranded necklace of baroque pearls, and Doug said Why don’t you get them?  I hadn’t expected this and hesitated to reply, and a woman next to me said Well if you’re not going to say yes to him, I will!  But then I regained my power of speech and now I am the happy owner of some lovely pearls which we decided would be one of my birthday presents.  Our tradition is that if your birthday falls during a buying trip your birthday lasts for the entire trip and you get multiple presents.  But this was a pretty good one.
So then off to view the exhibition, which was really amazing.  But do you know, for one of the world’s greatest ever geniuses da Vinci was also a bit of a flibbertigibbet who needed to have a supervisor to keep him focused on his many experiments so he would actually finish what he started.  He did have a friend who fulfilled this role for some years, but then the friend died and da Vinci got distracted by all sorts of other projects, and this is largely why his ground-breaking discoveries in human anatomy were not published before he died.  And some of his discoveries about how the heart works weren’t rediscovered until 1912.  Can you imagine the number of heart patients’ lives that might have been saved had his work been published in 1519? 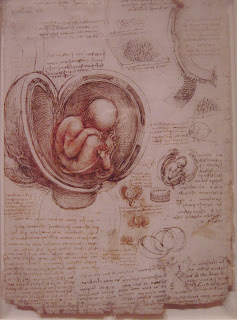 Unbelievably, you are allowed to photograph da Vinci’s original papers, albeit without a flash.  My camera’s flash turns itself on all the time when I don’t want it to, so I sought the assistance of a guard to help me turn it off so I didn’t get dragged off by the hair for breaking the rules.  Between us we thwarted my camera, so I was able to get some nice shots of some of da Vinci’s beautiful drawings.


So then a bit more looking about occurred before we left the Palace.  And now I have a couple of tea towels from the Queen’s own kitchenette.  Don’t ask me how I got them, cause I’ll never tell.  The less you know, the less you can blab. 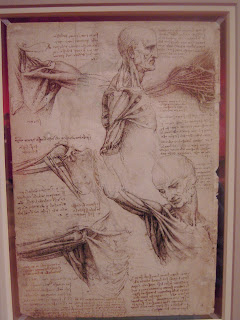 The next day we headed off to the Isle of Wight to look through Osborne House, Queen Victoria’s holiday home.  We caught the hovercraft from Portsmouth to Ryde, which is the longer way to get to Osborne House but far more fun.  Doug got to talking with one of the crew, and we were invited to take the trip over in the pilot’s cockpit.  What enormous fun that was!  It was a bit disconcerting to discover that hovercrafts don’t have steering wheels or brakes, and Sven (the pilot) did mention that the person who designed hovercrafts needed to be shot for forgetting to include some type of brake.  But he assured us that steering via foot pedals was easy enough, and that he had never missed a take-off or landing.  All you have to do is take into account the wind direction and speed, current, tide, hovercraft’s speed, general choppiness of the waves and any other watercraft in the way as you judge when to lay off the accelerator as you hit the beach.  Sven promised not to mow down any yachts while we were watching, which was good of him.
Queen Victoria referred to Osborne House, which is a whacking great enormous mansion, as “snug”.  Compared to Buckingham Palace I suppose it is.  It has beautiful gardens and a lovely sea view, and you could see why she and Albert loved the place even though her idea of snug and everyone else’s is probably a bit different.  You are not allowed to photograph inside Osborne House, which we found a bit odd after being allowed to photograph Leonardo da Vinci’s original drawings, and that was a pity because in one of the hallways is a life-sized white marble statue of an angel that is one of the nicest statues I’ve seen.  The place was swarming with guards, though, far more than Buckingham Palace, so I judged the chances of getting a photo (let alone tea towels) to be low and I behaved myself.
Then it was back to Portsmouth (this time joining the plebs in the main compartment of the hovercraft) and over to Berkshire for a quick spot of shopping.  Then we visited a few small antiques Fairs in the Cotswolds and pushed on into Lancashire for a gentle start to the main segment of shopping that we have coming up.  Next week will be huge in terms of shopping, but we’ve already got plenty to pack so we’ll be kept busy for the next few days.