﻿﻿I can’t tell you how many times I have heard this week Oooh I shouldn’t, my New Year’s Resolution was to be good.  But since when wasn’t it good to treat yourself?  Like the lady in the ad says:  You’re Worth It.


For the most part, the sin of breaking a New Year’s Resolution has been quickly overcome by the enjoyment of carrying off something vintage, beautiful and affordable.  And I can totally identify with that - I’ve been buying and selling antiques for a few decades now (it’s rude ask exactly how long) and I still very much enjoy carrying off bargain treasure.


So if you’re someone who thinks it’s bad to buy nice things for yourself, think again.  It’s good for you to be surrounded by beauty.  If it makes you smile and feel happy then it is good, by definition.  And you know, after having this conversation with a number of people in the last few days, there have been converts who have made this their mantra:  Small indulgences in myself aren’t sins.  I’m worth it.  And remember I’m not talking about thousands of dollars, I’m talking about small indulgences.  Not that you’re not worth big indulgences, of course.  I’m just saying that small indulgences don’t hurt.
But if this eminently sensible advice (do I give any other type?) still isn’t resonating with you, let’s keep it more basic – you can sin with impunity in my shop and I won’t tell.  My silence can be bought for a small fee.  Do you know how many women have secret bank accounts that their partners don’t know about?  A lot is the answer.  They use these accounts for their secret purchases, and some of them are pretty cashed up.  Who knew this was happening?  And why didn’t I think of it?
﻿﻿Until we opened the shop I had only ever met one woman who had a secret bank account that her husband was entirely unaware of, but since we’ve had the shop I’ve met heaps of them.  I’ve not met a man with a secret bank account – or maybe they’re just not sharing this information with me the way that women do.


We have lots of plans for 2013 – trying to cut the buying trips down to one a year (but a dang good one), build the rest of the house, and get some serious land care going on the property, which has been sadly neglected while we’ve been running the shop and dashing off overseas all the time.  But I have only one Resolution, and the picture depicting it came to me courtesy of the lovely Helga:  Live like someone left the gate open.  I think I can manage that. 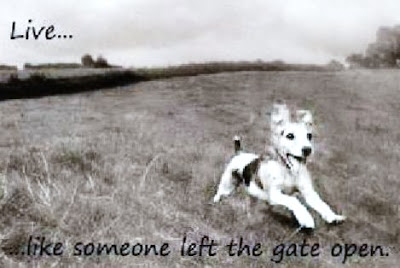