Why it's dumb to try training hyenas

The weather for the last buying day of the trip was still grey and gloomy, with everyone still breathing in cold concrete.  But we were not deterred.  We thought some people might be put off by the unpleasant conditions but no, far from it.  There were thousands of people at the Newark International Antiques Fair.


And, even worse, the Fair organisers now offer a super early shopping opportunity, where you can get in 2.5 hours earlier than the hoi-polloi.  But it costs £55 per person (that’s about $110 per person) to walk through the gates early.  I don’t think so.


Unfortunately, lots of people thought so, so even though we were through the gates within two minutes of (normal) opening, and even though I went straight to the guy I knew was most likely to have nice wooden printers’ trays, he only had a few left.  I still scored nine, but wanted quite a lot more.  At least I have some.  This is the cost of being one of the hoi-polloi, but I refuse to pay such an extortionate amount to get in early to an Antiques Fair.


It was amazing to watch some of the American dealers dashing around to get the colourful French enamelware.  Talk about a herd of hyenas!  They were seriously mixing it, with elbows, cussing, squawking and leaping about to get the best bits.


But too late, people!  I had seen the very same dealers selling the enamelware earlier in the week, and the hyenas were squabbling over my leftovers.  The best bits had already been scooped up by me during my record-breaking, award-winning shopping extravaganza and you will be seeing them soon.
When the herd calmed down I chatted with one of them about how good enamelware is (Americans call it graniteware).  He told me they had to buy all they could because this was the only Fair they had come to England to attend.
Wow, attending only one Fair - albeit the largest in the world - is a big risk.  I told him it was a risk I would never take, because sometimes the stuff you want just isn't there, even at such a large venue.  He said that was exactly his problem - he wanted a large amount of enamelware and wasn't finding it.  I went very quiet and didn't mention the huge amount of fabulous enamelware sitting with my shippers at that very moment.
But immediately after telling me he was in trouble on this trip because he couldn't find the stock he wanted, he said he and his associates would never dream of doing what Doug and I do, and spend a few weeks hunting things down.

﻿
So suffer in yer jocks, herd of hyenas!  You can’t rely on attending only one Fair, you’ve got to commit to attending multiple events if you want a high volume of quality pieces.  And you need to know what events to attend to achieve maximum yield.  But now I shall stop giving the hyenas free How To Do It Better advice.  Telling your rivals how to do something more effectively that has taken you years of experimentation and research to learn is dumb, right?
Maybe I'll write an eBook on it, and they can purchase a copy.  Lots of people have encouraged me to write an instructional book on how to do what I do, and maybe I will.  In the meantime, keep doing what you’re doing, herd of hyenas.  It works for me.
As I had already secured all the best bits of the enamelware (ha!), this time we concentrated on nice wooden items, glass and French wire baskets.  I hope everyone likes interesting vintage French egg baskets, because I’ve got plenty.  And a lovely school of Italian end-of-day glass fish, more wooden chopping boards and a couple of very cute wooden stools with attractive, distressed paintwork.


Yes, Quarantine is going to have its usual hissy fit when it sees this consignment.  Something to look forward to.


The particular packing challenge this time were three large, wooden, triangular-shaped, slatted drying racks.  They are French and were used on provincial farms to sun-dry tomatoes, fruit and flowers, and they look great.  They are triangular so when the pieces were dry they were easily tipped into sacks, so it was good industrial design in the backblocks of France back in the day.


I’ve occasionally seen these drying racks in extremely expensive shops in London so I know they look beautiful when they’re all waxed and glowing, but until now I’ve never been able to afford any.  Interior decorators in London snap them up, so the shops know they can keep the prices high – too high for the likes of me.  So hurrah that I stumbled across these three at affordable prices at the Fair.  I’ll be amazed if they’re not sold the first day I present them on our stand at a wholesale price.


We specifically came on this trip to source enamelware, wood, metalware and good semi-industrial design in general, but things like the drying racks you can’t plan on getting.  It’s the challenge and the fun of each buying trip – you never know what you’re going to find.  But if you hunt long enough and thoroughly enough, eventually you’ll find great things at great prices.  I love that bit.


The final packing is now done, so one last visit to the shippers and then it’s down to London to relax and play.
** Finally, here is an We're really back in Australia aside: it's been mostly warm and sunny since we've been back, and here are a couple of the girls, enjoying the sunshine.  Calypso is teasing Mischka by flicking her tail and batting her paws, but Mischka won in the end by dragging Calypso off the top shelf by her leg.
Also, don't forget the Caloundra Street Fair on Sunday, 27 April.  We'll be in our normal spot, with the first of the newly arrived vintage French pictures out, and some nice glass that hasn't yet been shown at the Markets. 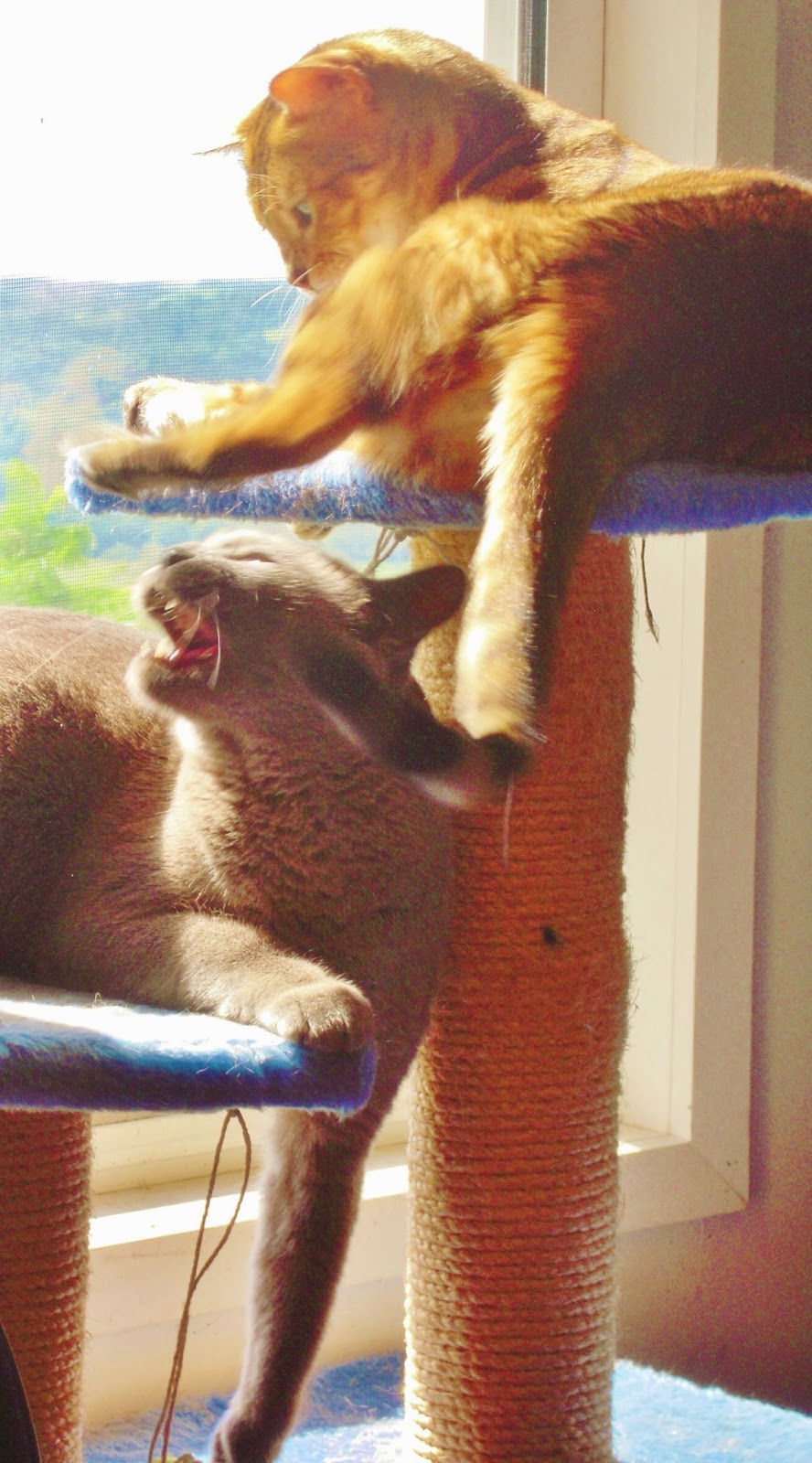 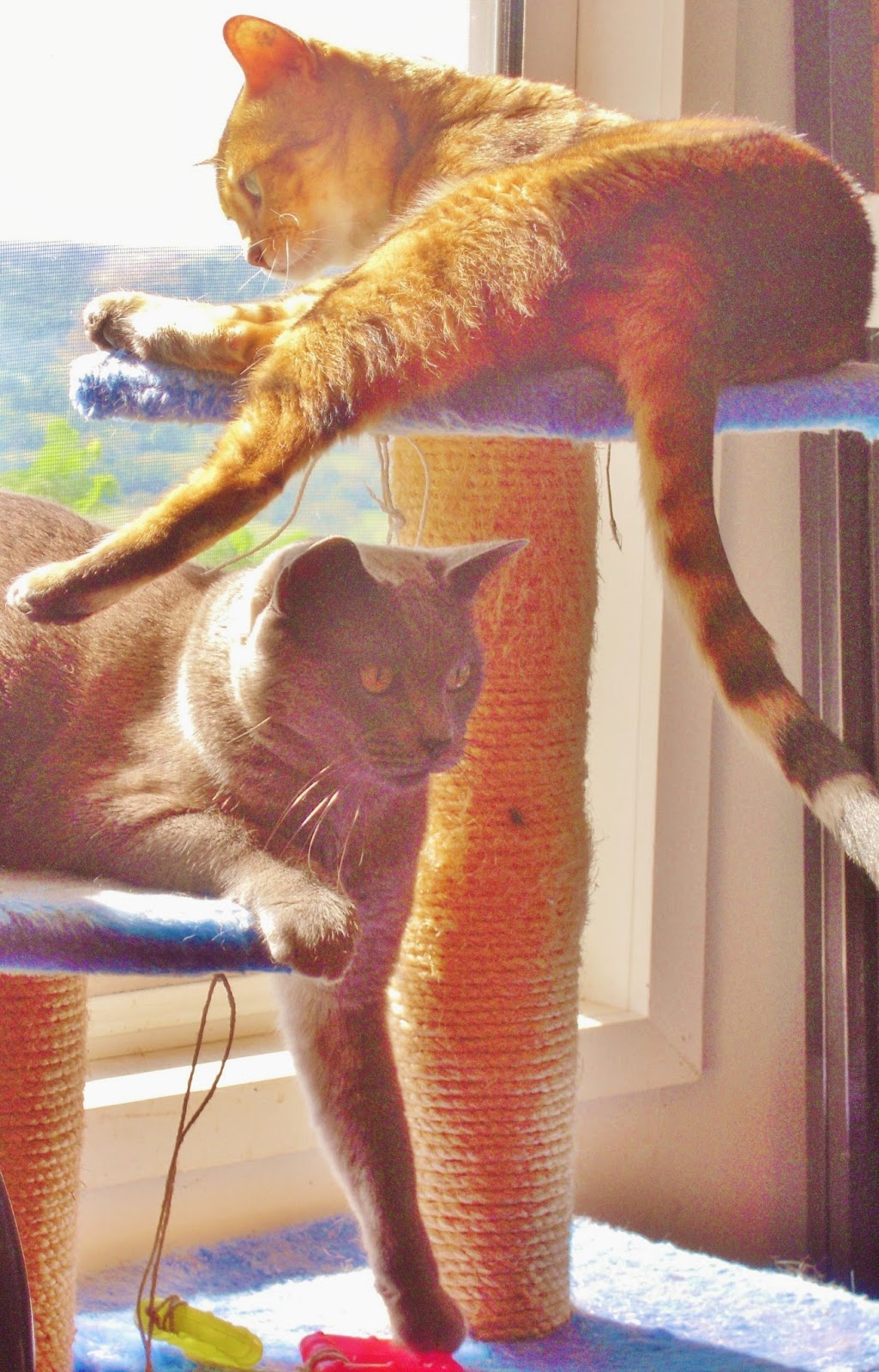