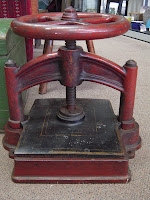 It’s been another excellent week on the sales front (hurrah!) so the pressure is on to keep the shelves fully stocked, but we’re keeping up with it.  So now, more importantly, we have to make an effort to get some of the bigger things out.  This week we’ve brought out a really lovely and extraordinarily heavy French bookpress.  This is the item that I lugged a kilometre back to our van from the Paris Markets, and it is so heavy it broke my cat trolley three times during that interminable trek.  It’s somewhat heavier than our huge cast iron pestle and mortar, which also fell to me to cart to the van from the Markets, and that’s 17kg.


People say they can’t believe that on a Saturday night in I declined going out to dinner and opted instead to go to bed (and not in a good French sense, just in a totally exhausted sense).  But if they had done the lugging I had done – not forgetting that the van was so far from the Markets and we had to go back to it three times, fully ladened with really heavy stuff – plus also do multiple laps of the Markets, then maybe I would elicit more sympathy.  How I suffer for my customers. 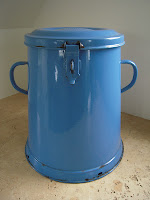 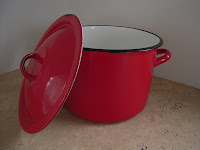 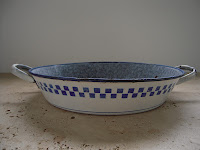 This week we’re also bringing out some amazingly coloured enamelware and probably the best Picquot ware tea set that we’ve ever had (sounds French but it’s actually English).  Yesterday I brought out two very cool semi-industrial looking metal potato baskets, and they both sold straight away.  One didn’t actually make it into the shop because it was snaffled by someone as Doug was carrying it in.  All the neeps wire baskets are now sold (neeps is Scottish for turnips), and also a very wonky but very attractive large German wire basket and a small but really stylish French wire basket came out yesterday and sold yesterday.  So that’s almost it for the wire-work.  I really favour the semi-industrial look, but it turns out so do lots of people so it’s hard for me to find and when I get it, it always sells quickly. 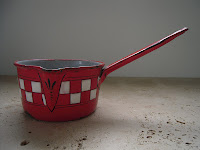 Still to come are some metal French grapes buckets, a nice metal milk crate from a Parisian Dairy (from back in the day when there were still dairies on the outskirts of ), and some very weird and yet weirdly attractive wire and wood box-crate-things, which no-one knows the faintest thing about.  Once I dig them out they’ll get a good wax-up and then make their appearance in the shop, and I don’t expect they’ll last long either.  And let’s not forget the wooden textile trolley from Lancashire (although that has a Dibs on it, so it might not make it into the shop) and the two big trolleys from the Dutch piano factory that I had to fight off an Italian and French dealer to get, although we need to have some glass cut for them so they can be presented as the coffee tables that they will inevitably be used as.
So we’ve still got plenty of really good stock to come out.  Someone asked this week if they had missed out on all the good things and all the bargains because they hadn’t made it in for the first few weeks of the new shipment being presented.  But no, we open boxes at random so there’s no telling what’s coming out next.  This week I put out some English Art Deco glass plates and bowls and I have $6 each on them, and you can’t do better than genuine Art Deco for $6 by anybody’s measure, so I feel confident in saying I still have plenty of good things and bargains to come.﻿﻿﻿﻿﻿﻿


The visitors in the shop this week have been the seasonal crop of New Zealanders and people from , who head north to escape the southern winter.  I used to live in , and if I could have headed north during winter I absolutely would have.  Mind you, it’s done little but rain here for weeks even though it’s meant to be the dry season, but it’s still warmer than down south.  And overwhelmingly people have been lovely, complimentary about the shop and appropriately admiring of the Moggie on Duty.  But yes, there have been a few strange ones, and I’m afraid when you’re a bit strange so close to me writing the weekly Blog then I will remember you and Blog on you.


So here’s the Strange Encounters for the week:


Strange Encounter 1:  it was only a brief encounter, but a man stood over my desk, frowning and shaking his head at my laptop.  You know you shouldn’t have that in here, he said, it’s totally out of keeping with the rest of the shop.  Would you have me use an abacus? I replied. Well, yes he said.  I was joking.  He wasn’t.  We’re a modern antiques shop, I said.  Well it just doesn’t look right, he grumbled.


Strange Encounter 2:  This week I’ve been wearing the cool t-shirts I bought in , and it’s sometimes amazing the responses I’ve had to them.  Maybe I should have bought some as retro-looking stock, because people always notice and comment on them.  Next time I’m in I’ll think about getting some.  The Mad Robots are particularly admired, with people wanting to know where to get them, and when they don’t want to travel to for them they will sometimes offer to buy them off my back.  Two women made the offer this week – have you ever had someone walk up to you and want to buy the clothes you’re wearing?  I can’t imagine doing it, and find it a bit strange.  One woman was very insistent – Really, she said, if you will take it off right now I’ll buy it right now.  But I don’t have anything to change into, I said, and I don’t want to frighten passing children.  Surely you can find something, she said, because I really want it.  But even if I had replacement clothes here, it’s not for sale I said.  But are you sure? she said, several times.  And yes, I was sure that I was not going to spend the rest of the day clad only in my bra.


Strange Encounter 3:  a couple came into the shop, on a day I was wearing my Death’s Head Mickey t-shirt (another purchase).  Oh, what happened to Mickey? the woman said.  He met with an untimely demise, I said.  She looked totally blank.  What? she said.  He carked it, I said, and that she understood.  Oh come on – surely standards of English haven’t fallen that much?  Not only do I require the people who read this Blog to enjoy a bit of text as well as pretty pictures, I also require people coming into the shop to have a standard level of education so they can understand basic English.  My shop, my rules, and that’s what I decree.

But wait, there’s more to Strange Encounter 3 – the woman took a fancy to my large French keys, but needed advice on whether to buy one.  Advice from The Other Side, that is.  So she popped out to her car and came back with a large crystal on a string, in order to scry for guidance on whether to buy one.  I am familiar with the practice of scrying – whoever said an Anthropology degree would not come in handy in a retail environment?  And I am always on the look out for Victorian era crystal balls or other old Wicca paraphernalia because it’s enormously popular and sells the instant I put it into the shop.  Anyway, she told me that the crystal going round-and-round over the keys meant yes, and backwards and forwards meant no.  But I’m sorry, I could see her hand moving.  She was good, and did it subtly, but nonetheless there was movement.  Anyway, officially the Spirits told her to buy two keys so that was good of them.  Maybe it was the means by which she convinced her husband she should buy things?  How can he argue with the Ghost of Granny?  I’d rather just tell Doug that I was going to buy something rather than go through that palaver, but whatever works I suppose.


Strange Encounter 4:  As I mentioned earlier, we’ve had lots of New Zealanders in the shop this week.  Despite what every other nationality thinks, Australian and New Zealander accents can be very different, particularly when they’re broad.  So a woman came in and admired Klaatu, commenting on what a good boy he was for sitting at his spot on the desk and behaving himself.  He’s a working cat, I said, and he knows the drill.  Oh, so he’s a retter, she said.  I had no idea what she was talking about – I don’t know what a retter is, I said.  In New Zealand working cats are called retters, she said, that’s what everyone calls them.  I’m afraid I’ve never heard of that, I said.  You know, she said, they catch rets and mice.  Ah, a ratter.  rAtter.  There’s an ‘a’ in that word, you know.  And anyway, miscommunications aside, perish the thought that Klaatu would sully his claws catching rats.  He’s a White Collar Cat, management material, and he has never even seen a rat.


And while I’m Blogging on New Zealanders, Strange Encounter 5 involved a woman who came and looked closely at our last remaining pair of French tailor’s shears (after bringing five back from the Paris Markets).  These are for shearing sheep, aren’t they? she said.  That’s a very New Zealander thing to say, I said.  They are tailor’s shears from Paris, and there aren’t many sheep in Paris.  Oh, aren’t there? she asked.  Well, not that I’ve seen lately, I said.


It sounds like I’ve had non-stop bizarre moments this week, but in fact they were all over very quickly and just gave me something to chuckle over.  Most people are very nice and friendly and not one bit strange.  But they don’t get Blogged about, do they?  The lesson here is that if you want people to talk about you, you need to give them something to talk about.


And in a non-shop moment, I’ve been trying to get a decent photo of Mischka for the last week – but she only sits still when she’s asleep and I want an Awake Shot.  She and Calypso are firm friends and often get into mischief together, and today I caught them about to be naughty and have a chew on an orchid we have in our bathroom.  But having been caught red-pawed they both legged it quick smart, although Calypso lingered for a moment, just to let me know that she’s a Big Girl Now and I’m not The Boss of Her - to which the answer is of course No You’re Not, and Yes I Am.  So the orchid survives unscathed for another day – until the ratbags can sneak back when I’m not looking.

And one last thing – I’ve just received an email from Caroline, from www.westendcottage.blogspot.com.au.  She’s a lovely lady who visited our shop a few weeks ago and has now blogged about her visit to us.  She’s almost as new to blogging as I am, and hopefully she’s enjoying it too.  This has become almost a work ‘Dear Diary’ for me, and I’m enjoying it – hopefully you are too.