The Potential Perils of Unpacking

Okay, Week Two of the new shipment has now concluded, and it was even better than Week One. Hurrah! We’re very happy with the reception that the new things are receiving. And honestly, if our approach of selling great things at great prices didn’t work then we’d just have to pack up and flounce off because I can’t think of anything else we could do. We worked out this week that our prices are now lower than they were four years ago when we opened the shop, and that’s because the exchange rate for the Australian dollar against the euro and pound has improved hugely but our pricing structure hasn’t changed. But it’s still working sufficiently well to send us to twice a year, and that’s all we ask – our needs are few.

So this week has seen us opening heaps more boxes. All of the books are now in the shop, and I tried to put some on the website but a technical glitch meant that it didn’t happen. Technology is a fine thing until it carks it and you don’t know why. So it’s just a selection of vintage French jewellery that’s new on the website this week and I’ll try to add other things next week. Several beautiful books sold as soon as they came into the shop, and that’s great but a bit annoying because I really wanted them on the website before they came into the shop. Still, I can only try my best with uncooperative technology - it’s just that my best doesn’t get me too far on the techno front.

﻿﻿﻿
﻿﻿﻿﻿But I have now (kind of) mastered photos on the Blog, as you know, so this week you’re getting some random shots from around the shop, plus the latest of Calypso, who is today’s shop manager but who has been entirely uncoop﻿﻿erative when it comes to taking photos. She has taken to squawking at people who put cameras in her face - I
think it’s Cat for Sod Off Paparazzi, and she even did it to me. Now I understand the frustration of people trying to photograph a beautiful cat who keeps pulling Ugly Passport Photo faces.﻿﻿﻿﻿﻿﻿﻿﻿
﻿
﻿﻿
﻿﻿﻿﻿﻿﻿﻿﻿﻿﻿In the shop some really outstanding glass has come out, including a large and beautiful signed Schneider crystal splash bowl. Schneider sounds German but he was actually French. He learned a lot of his technique from artisans at the workshops, to whom he gave space when the studio was being rebuilt after a fire.
His generosity was repaid with the opportunity to learn techniques from one of the foremost glass artists in . There was a Schneider exhibition in when we visited in March, where you could look at all the lovely pieces but not have them, so we were very pleased that we had already snaffled a substantial piece at the Markets. It’s totally amazing what you can find at the Paris Markets.

Also at the Paris Markets I bought a big and beautiful clear, moving to amber, moving to deep red French glass splash bowl. It wasn’t in the same league as the Schneider, but still really lovely and it was my plan to feature it in the window, but I sold it just as I was restyling the window so that plan was scuppered. I put the Schneider in pride of place instead, and it looks gorgeous so we’ll see how it goes.

Apart from the Schneider I’ve gone all gold and brass and amber in the window this week, with glass and metalware, a really nice brass-topped Byzantine Revival table, and a Victorian brass Aladdin kerosene lamp with a beautiful big white glass shade. I’m hoping that Doug will bring in an interesting Victorian brass spirit kettle on a stand this afternoon, after it’s been properly polished so it looks its best, and I think that will look really nice on the Byzantine Revival table. 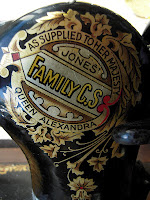 Oh, and I’ve also put a stunning Jones portable sewing machine in the window, which is in great condition and covered in way over-the-top decoration. Along with the Byzantine Revival Table the sewing machine is my feature piece in the window this week, and I expect it should attract some attention. The body of the machine states that it was the brand supplied to Her Majesty Queen Alexandra (wife of Edward ). 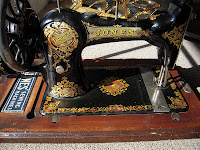 I can’t really picture her whipping up her own frocks in the drawing room, but maybe she had a secret Royal Hobby?

﻿﻿
So anyway, after so much unpacking our house looks like a tip, with boxes and bubble wrap everywhere. But when we’re unpacking boxes that have already been pre-opened for inspection and then stored in the shed it’s always best to do it at home rather than in the shop. We know that tree snakes live in our shed and Doug tells me that a rather large python has also taken up residence, although I’m yet to see it. I evict snakes from the shed whenever I find them, but at this time of year they’re looking for somewhere to curl up in and pre-opened boxes are ideal homes for them.

On a number of occasions I’ve reached the bottom of a box and found an unexpected guest at the bottom. Tree snakes tend to be reasonably sedate, although sometimes they’re a bit grumpy at being disturbed and strike at you. A friend who has some expertise in the area tells me that tree snakes are faking it and won’t really bite you because a human is too big for them to take on, but by golly I’ve encountered a couple who made a good show of “pretending” they were going to bite me. I was bitten by a python once, and that hurt like hell, and I was hoping for a decent scar so I had evidence of my suffering, but it healed up nicely and there isn’t a sign that it ever had it’s fangs around my leg.
﻿﻿﻿
﻿﻿﻿
So the bottom line is that once boxes have been opened and then spent any time in the shed the rest of the unpacking occurs at home, so any excitement can happen in my lounge room rather than the middle of the shop.
We did once accidentally bring a tree snake into the shop, inside a big Queensland Maple kitchen dresser which we had left in our carport overnight before taking it in. It hid in the back of the dresser until we went home, and then overnight made its way up onto the shelves and curled up inside a ceramic vase.

And then, as luck would have it, the next day a man came into the shop asking about the particular brand of ceramic that the snake was (unbeknownst to us) hiding in. He was a big guy, over six foot tall and broad with it, and to his credit when he saw there was a snake curled up in the vase he didn’t drop it. But he did squeal like a girl and thrust the vase at me – and at that point I didn’t know what type of snake he was passing to me so that was an alarming move. Then he ran - positively hightailed it - out of the shop, never to be seen again. Well, Chivalry Lives, I thought. ﻿﻿﻿﻿﻿﻿﻿﻿﻿﻿﻿
﻿﻿﻿﻿﻿
So then I had the problem of removing the snake from the vase and popping it into a bag so I could take it home and release it into the forest. The sensible thing would have been simply to put the entire vase into the bag, and then worry about decanting the snake once I was home. But at that very moment did I think of that? No I did not.

I was concerned to remove the snake while not breaking the vase, so I turned the vase upside-down over a bag and gave it a good shake. Sure enough, the snake fell out of the vase and into the bag, but then it immediately leapt straight out of the bag and onto the floor. Who knew that snakes could jump straight up into the air? Well they can. The snake then tried to leg it (figuratively speaking) to hide under a cabinet, but oh no, it wasn’t going anywhere except into my bag as far as I was concerned.


If anyone had looked through the window of the shop at that point they would have treated to the sight of me holding a fully grown tree snake by the tail and attempting to wrangle it into a bag. A bag that it really didn’t want to get into, so it was doing a great deal of wriggling and doubling back on itself and I was hopping about the shop like a mad woman while trying to hold on to it but avoid being bitten. In the end I prevailed, the snake was bagged and I took it home and put it in a nice tree. All without the help of the great big dude who had run squealing - and I rather fancy flapping his hands - from my shop.
﻿﻿
Anyway all of this is apropos of nothing, because so far from this shipment I have found no snakes hiding in the bottom of boxes retrieved from our shed. But I am on the look-out. Should you come to the shop and find a tree snake in your purchase it will cost Extra. Me extracting it for you will be Real Extra. And if you start squealing I’ll make you remove it yourself.
﻿﻿﻿﻿﻿