And now for something completely gruesome

Some years ago we visited Whitby, a charming seaside town in the north-east of England.  Quaint wooden fishing boats with their paint peeling off chug about the sheltered harbour, the streets of the old town are paved with cobble-stones and dominating the headland is the ruin of an imposing abbey built in 657.

The abbey was destroyed by Vikings in 867, rebuilt in 1078, then destroyed again by Henry VIII during the dissolution of the monasteries in 1539.  After that they gave up and it has remained a picturesque ruin ever since.  But don’t go there at night – the Abbey’s graveyard is where Dracula is said to have attacked a young lady victim, and some say his spirit still haunts the town.  Who knew that vampires had spirits?

But I digress, because Dracula was not the only celebrity connected with Whitby – it was also the home town of Captain Cook.

As an Englishman, and indeed a Yorkshireman, the good Captain would have enjoyed a roast as much as the next man.  So naturally, when we came upon an antique ceramic gravy boat in a rickety old shop in town, we knew we had found Captain Cook’s Personal Gravy Boat.

The chain of logic is undeniable – he came from Whitby, he liked roast dinners, it’s a gravy boat - essential to all civilized roast dinners, and it was found in Whitby.  It must have been his.

This is what we told everyone.  And everyone believed us.

And seeing how, in those days, everyone for us was largely drawn from the Australian and international intelligence community, this was an alarming insight into how gullible those agencies could be.  Or perhaps it was a charming reflection of how polite our friends were, whatever crazy talk we came out with.  Let’s go with charmingly polite. 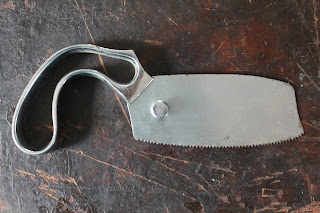 So anyway, using that same logic, I present to you the bone saw that sawed off the leg of Long John Silver.

Consider the logic:  Long John Silver had only one leg, this is a vintage bone saw, and erk, I think there is a little bit of blood and bone and gristle still stuck in the teeth.  How many vintage bone saws have you seen?  None, I’m thinking, because they're not common.

Ergo, not only is this the Very Saw that sawed off the Pirate’s leg, using DNA extraction Long John Silver could be reanimated, to be the scourge of the Caribbean once more.

Before you sniff at that – Hello?  Have you not seen Jurassic Park?  It’s totally do-able.  And before you sniff again about bringing back to life an allegedly fictional character, remember the bit about charmingly polite friends?

This infamous Bone Saw is now for sale, and can be yours for only $40, including free Pirate DNA.  It’s a good short saw (18cm long), which I am reliably informed allows you to put some real force to your leg-hacking-off exertions.

As for these other two surgical instruments, I call upon friends in the broader medical profession (looking at you Kim, Fran and Robyn) and minds immeasurably superior to mine to tell me what they are.  I could make up something fanciful about them, but you know I don’t do that sort of thing.
The bendy scissory thing doesn’t have sharp points but it’s 26cm long and looks like it’s designed to delve deep into you to extract something nasty – some alien parasite about to burst from your chest, or such thing.

The grab-you device is 20cm long and locks shut into perpetual grab mode.  There’s something just a little bit off about a device that allows a perpetual grab when it’s inside your guts, don’t you think?  They are $15 each.

I'd like to think that each of these Instruments of Urgh were salvaged from a mad scientist’s dungeon laboratory, but in fact they came from a long-ago closed down hospital in country Queensland.  Stainless steel was invented in about the 1940s, so they are no earlier than that.

I’m going to make a real effort to offer things for sale here and on the Facebook page (Continuum Antiques).  This is thanks to old friends making pointed comments about me not working hard enough, and friends more recently met, like the lovely Tamara who carried off nice things at Collectorama and who was encouraging rather than pointed about getting my act together.  Thank you everyone, I will work harder.  I would never lie about that.

You can either follow my Facebook page, but more reliable than Facebook is to complete the Follow by Email field at the top right of this page.  Now that the God of Blogspot has magically allowed this field to work again, you can receive my missives direct to your email intray with no effort on your part.  No effort is always a nice option.

So I thought I’d start with something a little unusual.  I don't get many medical pieces, but I snap them up when I find them because they're collected by lots of people.  Strange people, granted.  Could you be one of them?

To reserve one or all of these pieces you can contact me on Facebook or email ddpalmen@yahoo.com.au.  The God of Blogspot's wrath has smote the Comments function on the blog page, so it might not work.  You can try it, but I think is still out of action.

In an amazing twist to this tale, Whitby has a Pirate Festival each year - in January so they really do shiver their timbers.  So would you believe that this was the very bone saw used by Captain Cook's personal ship's surgeon to chop off the leg of Long John Silver?  Too bad I didn't think of that earlier.

We have noice, different, unusual glass and ceramics that I will display on this and the Facebook page, and small pieces of furniture, all coming soon.  We will post, deliver (locally) or cooperate with your freight company - all things are possible.

Most items won’t be particularly gruesome, but they will all have an interesting story.  Believe it, or not ….
Posted by Debra Palmen at 4:19 pm